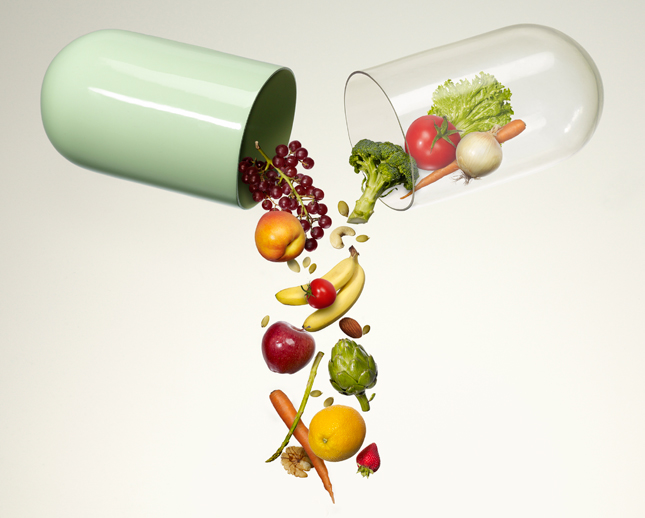 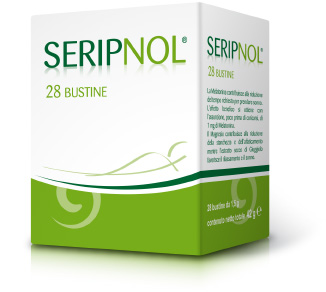 Nutraceutical product based on L-THEANINE, NATURAL EXTRACTS and MELATONIN with Magnesium

SERIPNOL® is useful to promote relaxation and sleep. 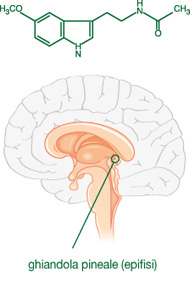 MELATONIN
Melatonin is a natural substance produced by the pineal gland (epiphysis), involved in the regulation of circadian and ultra-circadian rhythms of the body.
Shortly after the appearance of darkness, its concentrations in the blood increase rapidly and reach the maximum between 2 and 4 a.m. and then gradually reduce when approaching the morning.
A decline of melatonin caused by age has been established by numerous studies.
In subjects over 65 years the decrease was attributed to the reduction of exposure to light.
Several studies suggest that melatonin supplementation may be useful in sleep disorders and insomnia in particular.

The decline in melatonin secretion with age is considered one of the main factors involved in sleep disorders found in elderly subjects.

L-THEANINE
L-Theanine (γ-glutamiletilamide) is the main amino-acid, found only in tea plants, especially in the green tea ones.

L-Theanine acts as a neurotransmitter in the brain, stimulating the production of alpha brain waves and causing a feeling of relaxation. 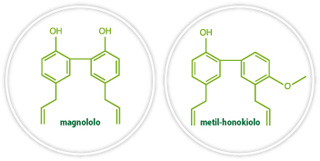 The bifenolici components Magnolol and Honokiol (extract of Magnolia officinalis) and the flavonoids components (extract of Ziziphus Jujuba) have been used for centuries in Eastern herbal medicine for their anxiolytic and hypnotics properties.

Magnolia officinalis, due to its content in honokiol and magnolol, is particularly indicated for the reduction of the states associated with the physical and psychological stress. It can help to reduce the stress states favoring a significant relaxing effect.

Zizyphus jujuba is a plant belonging to the family Rhamnaceae, native to South China and Central Asia. Scientific studies of the literature show that the beneficial effect explicate from Zizyphus jujuba is associated with decrease of activity of the monoaminergic system, which involves a decrease in the levels of central neurotransmitters amine. In fact, the accumulation of these mediators and the stimulation of their respective receptors, involves an excitation of the central nervous system, resulting in the appearance at the behavioral level of hyperactivity, agitation, insomnia and anxiety.

Magnesium has an activity of a calcium channel blocker and may help stabilize cell membranes allowing the smooth operation of the transmembrane ion transport, the process of muscle contraction and nerve conduction.

You should take one sachet dissolved in a glass of water at night before bedtime.

Nutraceutical product based on coenzyme Q10, RIBOFLAVIN, MAGNESIUM and dry extracts of PARTENIO and ANDROGRAPHIS

PARTENA® A rational association for the prophylaxis of migraine, nociceptive modulation and reduction of muscle tension states

COENZYME Q10
Coenzyme Q10, also called ubiquinone (or vitamin Q) is an organic molecule ubiquitous in biological systems. It is an essential substance involved in the process of cellular respiration.

RIBOFLAVIN
The brain has a very high metabolic activity, therefore the nutrient supply can greatly affect both its structure and its function. It follows that the nutritional approach for all neurological disorders such as migraine, is currently the subject of research. Vitamin B2 is an essential precursor for the synthesis of FAD (flavinmononucleotidi), necessary for the transport of the electrons at the level of the mitochondrial respiratory chain and it is essential for the physiological ATP production and consequently to maintain the stability of the membrane and for all the cellular functions. Vitamin B2 helps to protect cells from oxidative stress and to the normal functioning of the nervous system.

MAGNESIUM
Magnesium, adjusting the membrane potential of the cells and the permeability of the plasma membrane to the different types of ions (potassium, calcium, sodium), contributes to the normal functioning of the nervous system, namely, to the effective management of the transmission of nerve impulses and to the electrolyte balance. It contributes to normal muscle function. Being finally enzyme cofactor of many physiological reactions, it contributes to normal energy metabolism.

Partenio (Tanacetum parthenium), a member of the family of Compositeae, is a perennial herbaceous plant up to 1 meter high. Thanks to the main active components of the dry extract it is able to counteract localized states of tension and promote joint function.

ANDROGRAPHIS PANICULATA
Andrographis paniculata, belonging to the family of Acanthaceae, is an erect annual plant with slender stem from the aerial top of which we get a dry extract naturally rich in polyphenols and flavonoids.


How to use
We recommend 1 or 2 tablets per day, swallowed with a sip of water.